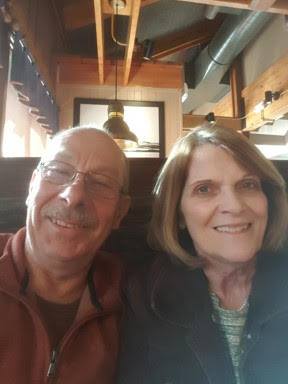 You know that super sweet older couple- they never fail to be in their seats each week; they’re active in service both within the church and the community; their amiable disposition and exuding kindness persuade you to think they’re your own grandaparents? That’s Bob and Sybl Yankey.

Raised as a Catholic, Sybl came to Illinois as a child. Bob was born in East St. Louis and would later work for American Steel Foundry where he labored for over thirty years. Their stars aligned at a homecoming party for Bob upon returning from the Army. While she grew up and into a fully committed Catholic, it took Bob much longer to be an avid church attendee. Against their better judgement, they attended service with their daughter and son-in-law at his Baptist church. Similar to myself Sybl described feeling that day as if the Pastor was preaching directly to her. They never looked back. They became immersed in their new congregation. “We knew nothing about the Bible,” though they quickly learned and, “we’re learning all the time.”

Bob and Sybl are part of the Old Guard. They, “were devastated by the vote [at Westview] and the prospect of losing Vance as a leader.” They were unacquainted with many of the congregants that helped to form Damascus, but today they feel at home. “It’s like they’ve always been family.”

Speaking of family – the Yankeys are blessed with six grandchildren. They enjoy escaping to their acreage in Southern Illinois to camp, build bonfires, and shoot bb guns because, “the country allows them to be kids.” Bob thinks young people, “have got to have great ideas!”

Bob and Sybl couldn’t be more involved at Damascus. They recited a laundry list of activities they participated in or lead over the years. Their pride and joy being the food pantry that was founded in their very own basement. When I inquired where God fits in their life, they spoke of the conviction and direction He ignites in their hearts. The food pantry has, “taken me [Bob] places where I never would’ve been comfortable,” Serving the Lord has allowed them to serve so many wonderful people in need. Bob and Sybl are so grateful for all of you and the support you’ve provided their pet project over the years. Helping them to help others by providing meals has clearly had a profound impact on their hearts and lives.

This unprecedented time has helped Sybl grow closer to God. By following the advice of her favorite excerpt, Jeremiah 29:13, by seeking the Lord with all of her heart- through prayer and goodwill towards others, the Yankeys have come to know Him as so many unfortunately never do. They have heeded Vance’s repeated call to read the word each day because they, “can do without people but they can’t do without Him.”

I thanked the Yankeys for everything they had done over the years to build the warm, welcoming, and supportive community I am blessed to call my church. I remember the folks like them that were the back bone of my childhood church, a place I’ve referred to before as my third home. Perhaps the reason they so easily feel a part of my family is because my own grandparents ran our church’s food panty.

I asked Bob and Sybl what became of the congregation that used to own our property. Their’s is a story I know all too well. My own childhood church saw its numbers steadily dwindle as children failed to occupy the pews of their parents or to take up the opportunity for involvement. While I suspect Bob and Sybl won’t be going anywhere any time soon, the Old Guard won’t always be around. It is therefore, incumbent upon me and my generation, to carry on what they started. To preserve the church and its legacy for our children and their children to come.